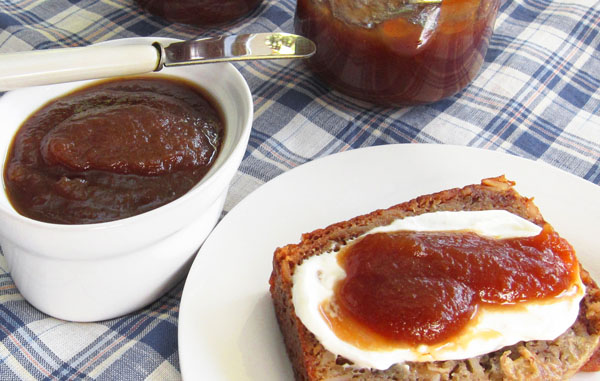 Apple butter is essentially a slow cooked apple sauce with a few spices thrown in. As the applesauce cooks the sugar from the apples caramelizes and reduces into a thick deep amber “butter.” Traditionally spread on breads in place of butter, thus the name apple “butter.”

Apple butter is a household staple where I grew up in Pennsylvania Dutch (Deuitch) country although its origins are rooted in Europe. In Germany it is called Apfel Kraut, and in the Netherlands Appel Stroop.

Apple butter recipes came to America with German speaking Lutherans, Reformed, and Anti-baptist religious groups from Germany, France, and Switzerland when they immigrated to the United states in late 17th century. The settlers chose Southeastern Pennsylvania for is rich soil that was suitable for the farming practices they used in Europe. Both Amish and Mennonite farm communities were established which exist, mostly unchanged, to this day. Not only did these settlers introduce their sustainable farming methods in Pennsylvania, but also their hearty Pennsylvania Dutch cooking!

Apple butter is actually very easy to make and has endless applications beyond being spread on bread which is irresistibly good by the way. It is also a heady addition to pies, pastries, slow roasted meats, BBQ sauces, salad dressings, or served along with farm made cheeses. Try adding apple butter tossed in with your apples the next time you’re baking an apple pie. The results are transformative!

Traditionally apple butter is “put up” in the fall on Pennsylvania Dutch farms to last until the next apple harvest. Likewise, this is one pantry staple you will find you will want to have on hand year round, I promise.

Peel, core, quarter, and chop the apples and place them in a nonreactive oven proof braising pan. Add the cider (or apple juice), the brown sugar, and salt and stir to combine. Place over medium heat on the stove top and when simmering partially cover the pan and continue to simmer, stirring occasionally, until the apples are very soft, about 30 minutes.

Remove the pan from the stove and allow to cool for a few minutes. Then blend the apples along with the liquid using a hand held immersion blender, or transfer the apples and liquid to a blender, and blend until the mixture is completely smooth with the consistency of apple sauce.

Stir in the lemon juice, cinnamon, and cloves until combined and transfer the pan to the oven, uncovered, and bake for several hours, stirring every 30 minutes. The mixture will slowly turn an amber color as the sugar caramelizes and the liquid reduces. I’ve found it generally takes about 3 hours, but every oven is different, so keep an eye on it until apple butter reaches a deep amber color with a thick spreadable consistency.

Remove the pan from the oven and set on a wire rack to cool to room temperature.

For storage: Sterilize a couple of jars along with their lids with boiling water. Spoon the apple butter into the jars, seal tightly, and refrigerate for up to about a month.

For longer storage follow standard hot water bath canning procedures and when sealed and cooled to room temperature, store in a dark place in your pantry for up to a year.

Here we are in the middle of summer, already!

With a month long hiatus sequestered in the studio working on a large painting that seemed to go on and on, I realized that with the summer heat and little time to spare, cooking light nourishing fare with the added perk of reheating for a repeat performance was the way to go.

No need to be slaving  away in the kitchen while summer passes you by!

Dukkah, “to pound” in Arabic, is a traditional Egyptian spice mix that is trending across the globe thanks to the Australians who took to this exotic blend, brought to Australia by Arabic immigrants, and beamed it to the rest of the western world. You can even find Dukkah at Trader Joe’s in America for $26 for 3.3 oz., but why not have some fun and make your own at a fraction of the cost?

Dukkah is a blend of pounded dry roasted nuts, seeds, spices, pepper, and salt. From there you can expand the mix with additions of dried herbs, chilies, chick pea flour (also lentil flour), and pinches of aromatic spices such as turmeric, cinnamon, or clove. This really is a cook’s moment to get creative and come up with your very own house blend. Wonderful sprinkled over soups, salads, vegetables, grains, and as a spice rub for meats and seafood.

I would suggest trying the basic recipe the first time around and then expand the recipe to suit your own taste preferences. You will surely become addicted to Dukkah and want to keep some on hand to dress up those quick summer meals.

While the recipe that follows may seem complicated, it actually is not, and once you’ve put it up you are all set to try it out in a myriad of ways. A quick summer meal with Dukkah roasted chicken breasts will follow in my next post.

END_OF_DOCUMENT_TOKEN_TO_BE_REPLACED

Za-atar, a regional spice mix that has been used throughout the Eastern Mediterranean and North Africa for centuries has suddenly become the it condiment of the moment. Popularized by cookbook authors and restaurateurs including Paula wolfort, Nigella Lawson, and Yotam Ottolenghi & Sami Tamimi in their Jerusalem Cookbook.

Za’atar is as elusive as it is exotic! The essential ingredients are sumac, sesame seeds, and salt. Simple enough, but from there added regional ingredients vary widely, so attempting to make za’atar at home can be a western cooks conundrum. I have tried various variations without actually encountering an authentic za’atar from the region. Thankfully, a dear friend, who was off to London, armed with a sourcing list, went za’atar shopping for me and returned with a treasure trove of authentic za’atar and sumac from Comtoir Libanais. The Comtoir Libanais za’atar is robust, colorful, delightfully tasty, and addictive. I highly recommend a visit to their website.They also recently released a cookbook for those of you eager for further explorations  into the foods of the Eastern Mediterranean.

The key ingredients in the recipe that follows are sumac, with a tart citrus taste, and wild thyme (similar to hyssop), with a sharp almost astringent flavor, found mostly in the Eastern Mediterranean. Neither is readily available other than from online spice purveyors, but some reasonable substitutes of my own are listed below.

Strip the fresh wild thyme leaves off the stem, discarding the stems. Place the leaves on a baking sheet in a single layer and dry roast just until they crumble easily between the fingers and are still green in color; about 10 to 12 minutes, being careful not to over dry roast the leaves, which will turn the leaves brown and bitter.

Toast the sesame seeds in a dry skillet over medium low heat, tossing the seeds so they toast evenly. Set aside to add to the mix later.

Place the toasted wild thyme, sumac powder, and salt in a mortar and grind together into a fine powder. Add the toasted sesame seeds and coarsely grind into the mix, leaving some seeds whole. Taste and add more salt if needed and the chile powder if using.

Serve with toasted, or grilled, breads generously brushed with olive oil, or use as a condiment with just about anything else you can imagine. The flavor is addictive and you will find that za’atar will find a permanent place as a must have seasoning on hand at all times in your kitchen!

Origins are a bit sketchy, but harissa is found across the Middle East and North Africa, including Morocco, Algeria, Libya, and Tunisia, as well as in France. Rich, earthy, and spicy, harissa is served with couscous and tagines, and found at nearly every food stall and restaurant across Morocco.

Recipes also vary widely, but most harissas include assorted dried chilies, garlic, olive oil and spices including cumin, coriander, sometimes caraway. Harissa is widely available commercially in bottles, tubes, and cans…but not to be confused with harissa l’ eau de toilette by Comme de Garcon for you fashion forward cooks!  I kid you not.

Split the dried chilies lengthwise and remove the seeds and reserve the seeds for toasting.  Tear the chilies into pieces and place in a sauce pan with water to cover. Bring to a simmer and cook 15 minutes or until the chilies are very soft. Drain and set aside.

Toast the cumin seeds, coriander seeds, caraway seeds, and chili seeds in a dry sauté pan over low heat. Remove from the pan and set aside to cool. Once the seeds are cool, place in a suribachi (a very handy Japanese pottery mortar with ridged interior for grinding spices) or spice grinder and grind to a medium blend. Set aside.

Add 1 ½ tablespoons of olive oil to a saute pan, over medium heat, and when hot add the onions and and saute until soft. Add the garlic and saute an additional 2 minutes until just beginning to color. Add the drained red chilies, the ground cumin, coriander, caraway, and chili seeds and saute for a minute or two while stirring. Add the tomato paste to one side of the pan to caramelize and then stir it into the chilies and herbs while adding the lemon juice, salt, and pinch of sugar. Transfer the ingredients to a small food processor and blitz into a thick puree, adding an additional 1 ½ tablespoons olive oil as you blitz. The harissa should be the consistency of heavy cream. Taste and add additional salt if needed.

When you are ready to serve, you may add couscous broth to thin the harissa slightly so that it is easily spooned or poured onto the couscous.

Transfer to a small serving bowl or pitcher and serve with couscous, grilled meats, fish, or even slathered on a sandwich.

To store, place in a jar and, when completely cool, pour a little olive oil over the harissa to seal it. Put the lid on the jar and refrigerate. The harissa will keep for about a week refrigerated. It also freezes well for longer storage.